Machine Learning is a part of Data Science, an area that deals with statistics, algorithmics, and similar scientific methods used for knowledge extraction.

Engineers can use ML models to replace complex, explicitly-coded decision-making processes by providing equivalent or similar procedures learned in an automated manner from data. ML offers smart solutions for organizations that want to implement decision processes that are just too complex to be manually coded.

What is predictive analytics?

statistical techniques (including machine learning, predictive modeling, and data mining). Predictive analytics helps us to understand possible future occurrences by analyzing the past.

machine-learning algorithms can learn from and make predictions on data, data-driven decisions.

How does predictive analytics work?

There are two types of predictive models. They are Classification models, that predict class membership, and Regression models that predict a number.

The algorithms perform the data mining and statistical analysis, determining trends and patterns in data.

The most widely used predictive models are:

Each classifier approaches data in a different way, therefore for organizations to get the results they need, they need to choose the right classifiers and models.

data scientists and IT experts are tasked with the development of choosing the right predictive models – or building their own to meet the organization’s needs.

There are 3 types of machine learning (ML) algorithms:

It has corresponding output variables, and so solves for f in the following equation:

This allows us to accurately generate outputs when given new inputs.

We’ll talk about two types of supervised learning: classification and regression, and Ensembling:

1-1. Classification is used to predict the outcome of a given sample when the output variable is in the form of categories. A classification model might look at the input data and try to predict labels like “sick” or “healthy.”

1-2. Regression is used to predict the outcome of a given sample when the output variable is in the form of real values. For example, a regression model might process input data to predict the amount of rainfall, the height of a person, etc.

1-3. Ensembling : It means combining the predictions of multiple machine learning models that are individually weak to produce a more accurate prediction on a new sample. Algorithms — Bagging with Random Forests, Boosting with XGBoost — are examples of ensemble techniques.

Unsupervised learning models are used when we only have the input variables (X) and no corresponding output variables. They use unlabeled training data to model the underlying structure of the data.

2-1. Association is used to discover the probability of the co-occurrence of items in a collection. It is extensively used in market-basket analysis. For example, an association model might be used to discover that if a customer purchases bread, s/he is 80% likely to also purchase eggs.

2-2. Clustering is used to group samples such that objects within the same cluster are more similar to each other than to the objects from another cluster.

Reinforcement learning is a type of machine learning algorithm that allows an agent to decide the best next action based on its current state by learning behaviors that will maximize a reward.

Reinforcement algorithms usually learn optimal actions through trial and error. Imagine, for example, a video game in which the player needs to move to certain places at certain times to earn points. A reinforcement algorithm playing that game would start by moving randomly but, over time through trial and error, it would learn where and when it needed to move the in-game character to maximize its point total.

Figure 1: Linear Regression is represented as a line in the form of y = a + bx.

In Linear Regression, the relationship between the input variables (x) and output variable (y) is expressed as an equation of the form y = a + bx. Thus, the goal of linear regression is to find out the values of coefficients a and b. Here, a is the intercept and b is the slope of the line.

Figure 1 shows the plotted x and y values for a data set. The goal is to fit a line that is nearest to most of the points. This would reduce the distance (‘error’) between the y value of a data point and the line.

Logistic regression is best suited for binary classification: data sets where y = 0 or 1, where 1 denotes the default class. For example, in predicting whether an event will occur or not, there are only two possibilities: that it occurs (which we denote as 1) or that it does not (0). So if we were predicting whether a patient was sick, we would label sick patients using the value of 1 in our data set.

Logistic regression is named after the transformation function it uses, which is called the logistic function h(x)= 1/ (1 + ex). This forms an S-shaped curve.

In logistic regression, the output takes the form of probabilities of the default class (unlike linear regression, where the output is directly produced). As it is a probability, the output lies in the range of 0-1. So, for example, if we’re trying to predict whether patients are sick, we already know that sick patients are denoted as 1, so if our algorithm assigns the score of 0.98 to a patient, it thinks that patient is quite likely to be sick.

This output (y-value) is generated by log transforming the x-value, using the logistic function h(x)= 1/ (1 + e^ -x) . A threshold is then applied to force this probability into a binary classification. 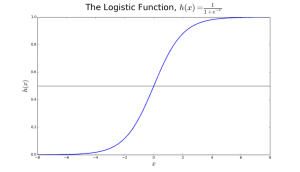 Figure 2: Logistic Regression to determine if a tumor is malignant or benign. Classified as malignant if the probability h(x)>= 0.5. Source

In Figure 2, to determine whether a tumor is malignant or not, the default variable is y = 1 (tumor = malignant). The x variable could be a measurement of the tumor, such as the size of the tumor. As shown in the figure, the logistic function transforms the x-value of the various instances of the data set, into the range of 0 to 1. If the probability crosses the threshold of 0.5 (shown by the horizontal line), the tumor is classified as malignant.

The goal of logistic regression is to use the training data to find the values of coefficients b0 and b1 such that it will minimize the error between the predicted outcome and the actual outcome. These coefficients are estimated using the technique of Maximum Likelihood Estimation.

Classification And Regression Trees (CART) are one implementation of Decision Trees.

The decision tree in Figure 3 below classifies whether a person will buy a sports car or a minivan depending on their age and marital status. If the person is over 30 years and is not married, we walk the tree as follows : ‘over 30 years?’ -> yes -> ’married?’ -> no. Hence, the model outputs a sports car. 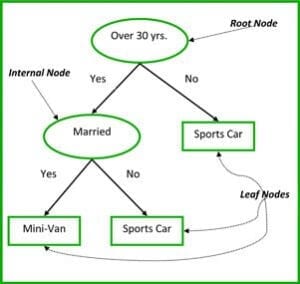 This algorithm is called ‘naive’ because it assumes that all the variables are independent of each other, which is a naive assumption to make in real-world examples.

Using Figure 4 as an example, what is the outcome if weather = ‘sunny’?

To determine the outcome play = ‘yes’ or ‘no’ given the value of variable weather = ‘sunny’, calculate P(yes|sunny) and P(no|sunny) and choose the outcome with higher probability.

The K-Nearest Neighbors algorithm uses the entire data set as the training set, rather than splitting the data set into a training set and test set.

When an outcome is required for a new data instance, the KNN algorithm goes through the entire data set to find the k-nearest instances to the new instance, or the k number of instances most similar to the new record, and then outputs the mean of the outcomes (for a regression problem) or the mode (most frequent class) for a classification problem. The value of k is user-specified.

The similarity between instances is calculated using measures such as Euclidean distance and Hamming distance.

The Apriori algorithm is used in a transactional database to mine frequent item sets and then generate association rules. It is popularly used in market basket analysis, where one checks for combinations of products that frequently co-occur in the database. In general, we write the association rule for ‘if a person purchases item X, then he purchases item Y’ as : X -> Y.

Example: if a person purchases milk and sugar, then she is likely to purchase coffee powder. This could be written in the form of an association rule as: {milk,sugar} -> coffee powder. Association rules are generated after crossing the threshold for support and confidence. 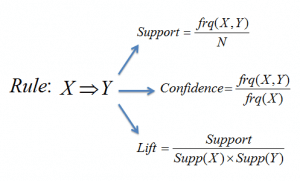 Figure 5: Formulae for support, confidence and lift for the association rule X->Y.

K-means is an iterative algorithm that groups similar data into clusters.It calculates the centroids of k clusters and assigns a data point to that cluster having least distance between its centroid and the data point. 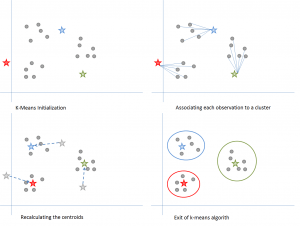 Here’s how it works:

Next, reassign each point to the closest cluster centroid. In the figure above, the upper 5 points got assigned to the cluster with the blue centroid. Follow the same procedure to assign points to the clusters containing the red and green centroids.

Principal Component Analysis (PCA) is used to make data easy to explore and visualize by reducing the number of variables. This is done by capturing the maximum variance in the data into a new coordinate system with axes called ‘principal components’.

Each component is a linear combination of the original variables and is orthogonal to one another. Orthogonality between components indicates that the correlation between these components is zero.

There are 3 types of ensembling algorithms: Bagging, Boosting and Stacking. We are not going to cover ‘stacking’ here, but if you’d like a detailed explanation of it, here’s a solid introduction from Kaggle.

The first step in bagging is to create multiple models with data sets created using the Bootstrap Sampling method. In Bootstrap Sampling, each generated training set is composed of random subsamples from the original data set.

The second step in bagging is to create multiple models by using the same algorithm on the different generated training sets.

This is where Random Forests enter into it. Unlike a decision tree, where each node is split on the best feature that minimizes error, in Random Forests, we choose a random selection of features for constructing the best split. The reason for randomness is: even with bagging, when decision trees choose the best feature to split on, they end up with similar structure and correlated predictions. But bagging after splitting on a random subset of features means less correlation among predictions from subtrees.

The number of features to be searched at each split point is specified as a parameter to the Random Forest algorithm. 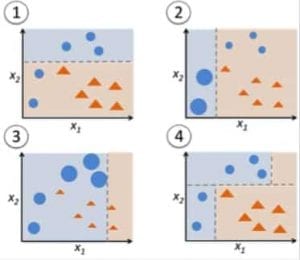 In Figure 9, steps 1, 2, 3 involve a weak learner called a decision stump (a 1-level decision tree making a prediction based on the value of only 1 input feature; a decision tree with its root immediately connected to its leaves).

The process of constructing weak learners continues until a user-defined number of weak learners has been constructed or until there is no further improvement while training. Step 4 combines the 3 decision stumps of the previous models (and thus has 3 splitting rules in the decision tree).

First, start with one decision tree stump to make a decision on one input variable.

Second, move to another decision tree stump to make a decision on another input variable.

We observe that the size of the two misclassified circles from the previous step is larger than the remaining points. Now, the second decision stump will try to predict these two circles correctly.

Third, train another decision tree stump to make a decision on another input variable.

The three misclassified circles from the previous step are larger than the rest of the data points. Now, a vertical line to the right has been generated to classify the circles and triangles.

We have combined the separators from the 3 previous models and observe that the complex rule from this model classifies data points correctly as compared to any of the individual weak learners.

To recap, we have covered some of the most important machine learning algorithms for data science:

Editor’s note: This was originally posted on KDNuggets, and has been reposted with permission. Author Reena Shaw is a developer and a data science journalist.

About the Author: Masoomeh Gh-Farahani